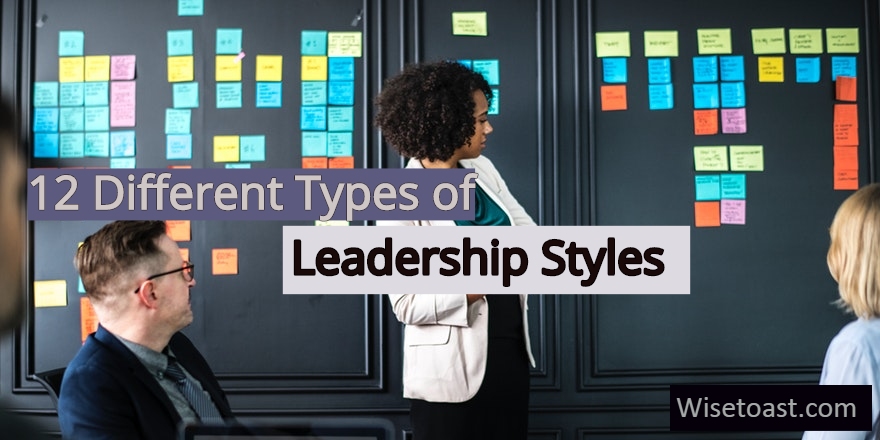 Some leaders cannot work comfortably with a high degree of followers’ participation in decision-making. Some employers lack the ability or the desire to assume responsibility.

What are Different Types of Leadership Styles?

We have covered 12 different types of ways people tend to lead organizations or other people. Not all of these styles would fit every situation, but you can read them through to see which one fits your company.

They reach decisions, communicate them to subordinates and expect prompt implementation. An autocratic work environment normally has little or no flexibility.

Some of the leaders that display this kind of leadership include: Albert J. Dunlap (Sunbeam Corporation) and Donald Trump (Trump Organization), among others.

Steve Jobs is another leader who was famous for using fear to inspire people to get their work done. This leadership style can obviously stifle the leader’s subordinates, but can also be useful in a crisis when important decisions need to be made without delay. You can read leadership quotes by Steve Jobs and many other visionary leaders.

In this leadership style, subordinates are involved in making decisions. Unlike the autocratic style, this leadership is centered on subordinates’ contributions. The democratic leader holds final responsibility, but he or she is known to delegate authority to other people, who determine work projects.

The most unique feature of this leadership is that communication is active upward and downward. With respect to statistics, democratic leadership is one of the most preferred styles of leadership, and it entails the following: fairness, competence, creativity, courage, intelligence and honesty.

George Washington was a leader who was famous for his democratic focus. Medical and high-tech industries fit well with a democratic leadership style because they require a high amount of collaboration to function.

Sports is clearly an area where we can observe many leadership styles, and one in which strategy is crucial. Hockey player and coach Wayne Gretzky is well-known for his skill in strategizing.

Strategic leaders anticipate future needs and make decisions in the present to meet those needs. Gretzky famously said, “‘I skate to where the puck is going to be, not where it has been.”

Unlike other leadership styles, transformational leadership is all about initiating change in organizations, groups, oneself and others.

Transformational leaders motivate others to do more than they originally intended and often even more than they thought possible. They set more challenging expectations and typically achieve a higher performance.

William Edwards Deming, a statistician and engineer, is a leader who saw the best way certain systems could operate and taught those under him how to accomplish these goals.

Team leadership involves the creation of a vivid picture of a team’s future, where it is heading and what it will stand for. The vision inspires and provides a strong sense of purpose and direction.

Team leadership is about working with the hearts and minds of all those involved. It also recognizes that teamwork may not always involve trusting cooperative relationships.

The most challenging aspect of this leadership is whether or not it will succeed. According to Harvard Business Review, team leadership may fail because of poor leadership qualities, as well as other challenges. For example, an airline flight crew would be much more efficient if the team remained consistent.

Studies have shown that teams that have worked together for a long period of time are more effective than those that have not. But because keeping a flight crew together would be expensive, crews change their members all the time. Situations such as this are just one example of the challenges teams face.

This form of leadership normally exists where there are various cultures in the society. This leadership has also industrialized as a way to recognize front-runners who work in the contemporary globalized market.

Organizations, particularly international ones, require leaders who can effectively adjust their leadership to work in different environs. Most of the leadership environments in the United States are cross-cultural because of the different cultures that live and work there.

One example of a cross-cultural leader in sports is quarterback and Heisman Trophy winner Mariota Marcus. His Hawaiian background caused him to be an unpretentious player, in contrast to being a more aggressive one, yet he was still successful.

Facilitative leadership is dependent on measurements and outcomes – not a skill, although it takes much skill to master. The effectiveness of a group is directly related to the efficacy of its process. If the group is high functioning, the facilitative leader uses a light hand on the process.

Laissez-faire leadership gives authority to employees. According to azcentral, departments or subordinates are allowed to work as they choose with minimal or no interference. According to research, this kind of leadership has been consistently found to be the least satisfying and least effective management style.

But to a certain extent, delegating is necessary. Famous historical projects led by laissez-faire leaders include the building of the Panama Canal and the Hoover Dam. With both projects, the presidents involved had to delegate many responsibilities in order to succeed.

Completion of Panama Canal in 1904 was a complicated feat. This was only made possible when American President of that time Theodore Roosevelt decided to lead this project. The successful completion of Panama Canal is an engineering marvel, because of its geographical location it came across several road blocks and incidents, but all hurdles were overcome as authority was correctly delegated to professionals.

This is a leadership style that maintains or continues the status quo. It is also the leadership that involves an exchange process, whereby followers get immediate, tangible rewards for carrying out the leader’s orders. Transactional leadership can sound rather basic, with its focus on exchange.

Being clear, focusing on expectations, giving feedback are all important leadership skills. Transactional leadership behaviors can include: clarifying what is expected of followers’ performance, explaining how to meet such expectations, and allocating rewards that are contingent on meeting objectives.

Basically, in this kind of leadership, followers are helped to improve their skills. Coaching leadership does the following: motivates followers, inspires followers and encourages followers.

Some examples of people who have led through coaching are tennis coach Nick Bollettieri and dog behaviorist Cesar Milan.

In this type of leadership, the charismatic leader manifests his or her revolutionary power. Charisma does not mean sheer behavioral change. It actually involves a transformation of followers’ values and beliefs.

Therefore, charismatic leaders are not merely a simply populist leaders who affect attitudes towards specific objects. Rather, these leaders transform the underlying normative orientation that structures specific attitudes.

Charismatic leaders tend to have powerful personalities and attract huge followings. Examples of such leaders are Barak Obama and Oprah Winfrey.

This form of leadership involves leaders who recognize that the methods, steps and processes of leadership are all obtained with and through people.

Most great and successful leaders have some sort of vision for where they are going. However, there are those who are highly visionary in their leadership.

Examples of leaders who had powerful and inspirational visions include Nelson Mandela and Dr. Martin Luther King Jr. Outstanding leaders will always transform their visions into realities.